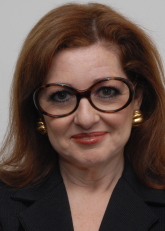 Educated in Europe and America, and graduated at Harvard University, Melinda Davis has been observing and analyzing the culture for more than twenty years. She is the founder and chairman of The Next Group, the futurist think tank behind The Human Desire Project, an ongoing initiative launched in 1996 to investigate what makes us want the things we want and do the things we do. The project began as a study for big business (Davis’ clients include many of the most powerful names in consumer marketing, as well as politicians, pop culture icons, and even a well-known religious figure). The rather startling conclusions of the Project ring bells far beyond the business world. Davis is a popular speaker internationally to a wide range of audiences. She is the author of „The New Culture of Desire“, a radical new vision of the passions that rule us. Melinda Davis thesis: throughout human history, our behavior has been driven by our physical survival instinct: “I don’t want to be killed” and “Let’s have sex.” Now, in a new world where our threats are more mental than physical, our survival instinct has become mental, as well: “I don’t want to go nuts” and “Let’s get in the zone.” In Human History Part II, as Davis calls it, we have redefined the ultimate fear and the ultimate pleasure. Now we are fighting for our interior lives – and that change changes everything, from our personal habits to the global marketplace, from the qualities we look for in the things we buy, to the qualities we demand in our leaders.